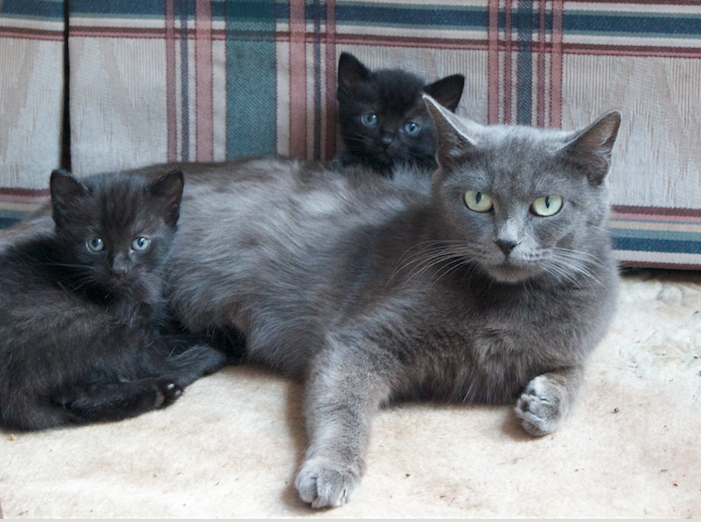 As you may recall, Bryan and I embarked on the Feral Cat Socialization experiment in early February. We fed an outdoor feral cat, Young Graymund, for several months, then trapped her in our home in an attempt to Stockholm syndrome her into loving us. She was never allowed outside. She staked out a den under the couch, emerging mostly to eat, crap and hiss.

Gray still hates all humans. So the original experiment, to tame a feral feline, was an abject failure. HOWEVER. Unbeknownst to us, we’d trapped a knocked-up cat. On March 27, Gray gave birth. We are now the proud owners of one queen and two catlings. (That’s cat-person talk for one un-neutered female [we will neuter her as soon as she’s done nursing] and two kittens. Also, a male cat is a tom [duh], a neutered male is a gib, and a neutered female cat is a molly. Together, they are a clowder of cats. FASCINATING, no?)

I am pleased to announce TOTAL SUCCESS with the Feral Cat Socialization experiment. Here’s why:

1. We started the experiment with the goal of owning a loving cat. Now we will have TWO loving cats and one hateful cat who’s still a darned good mom.

2. Because Gray was trapped inside during the bulk of her pregnancy, she had food and shelter during a time when she and her in utero catlings direly needed both. I am sure the whole cat family is way healthier now than they’d have been if they were living on the streets. Their life expectancies also are longer than those of feral cats.

3. Three cats with healthy reproductive systems will now be vaccinated and neutered, ending a cycle of cat pregnancy and reducing our neighborhood’s feral cat population.

5. Gray takes care of all the parenting: she feeds the babies, teaches them to eat, groom themselves, crap in a litter box… this turnkey-cat operation is super simple AS WELL AS FUCKING ADORABLE.

We started daily handling of the catlings when they were three weeks old, because everything I read suggested it’s not beneficial to separate kittens from their mothers sooner than that, and ages 4 to 7 weeks are peak socialization times. Gray hissed something fierce when we first started handling her kittens, but that was all she did. I scoop them up with an oven mitt if she’s within swiping distance. Unlike their mother, the kittens show no fear of humans and are quite content to be held and petted. It’s interesting to watch these first-generation indoor cats develop. I’d worried they may learn to distrust us from watching Gray, but that hasn’t been the case.

Isn’t this clowder so cute? Don’t you just love them?