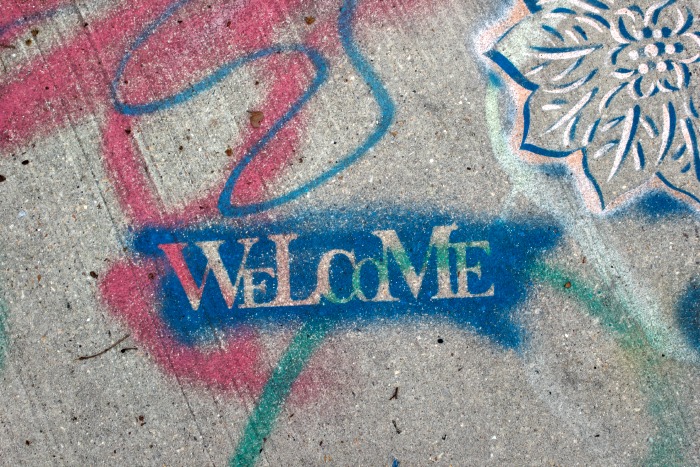 “Welcome” is the opposite of how I felt while being peeped upon.

In 2009, New Orleans’ Bywater neighborhood had begun gentrifying in earnest. Crumbling brick warehouses were being renovated and converted into loft apartments right and left. I rented a studio apartment in a former factory, which had the added benefit of low rent. It was the first time I’d had such luxuries as central AC and a dishwasher. Best of all, my apartment had a bank of windows facing the street and gated parking lot. When the late evening light slanted across my polished concrete floor, I felt like every trope of urban adulthood had come true for me.

After a few years, I met Bryan on OkCupid and he moved in. This was technically not allowed since he wasn’t on the lease, but we were in love and couldn’t be bothered to care. At a dinner party, our neighbor told us he’d seen the building’s owner peeping in our window. Not just a passerby’s casual glance. The owner was quite stationary, leaning in and squinting through the blinds that never closed completely.

Bryan was surprised that anyone would peep so brazenly. We both dismissed our neighbor’s claims as exaggeration—until Bryan returned home from a mixing gig and saw the behavior himself. But the peeper had left by the time he was within shouting distance.

After that, we noticed a pattern. The peeping always occurred around 9:30 or 10 p.m. The peeper stood just out of range of the security cameras. If we noticed him staring, his response was to keep staring with even more force. Once, we were entertaining a friend who asked, “Is there normally an old man who makes eye contact pretty intently and then walks away?”

It made for a good party story, but ultimately I felt like a prisoner in my home, powerless to complain lest I be evicted from one of the only nice apartments I could afford in a neighborhood where rent was skyrocketing. Bryan and I extensively discussed confronting the peeper or secretly taping him with an iPhone, but ultimately neither seemed like a tenable solution. We didn’t have a hiding spot or a clear sense of his schedule, because he didn’t peep every night. And we didn’t want to confront him because Bryan was living there illegally and the peeper owned the complex. Also, the peeper is extremely wealthy, and we frankly were afraid of pissing him off.

The peeping stopped when we moved out. I bought a house nearby, so the peeper is still my neighbor. I see him occasionally, walking his dog or jogging in Crescent Park.

He pretends not to know me.