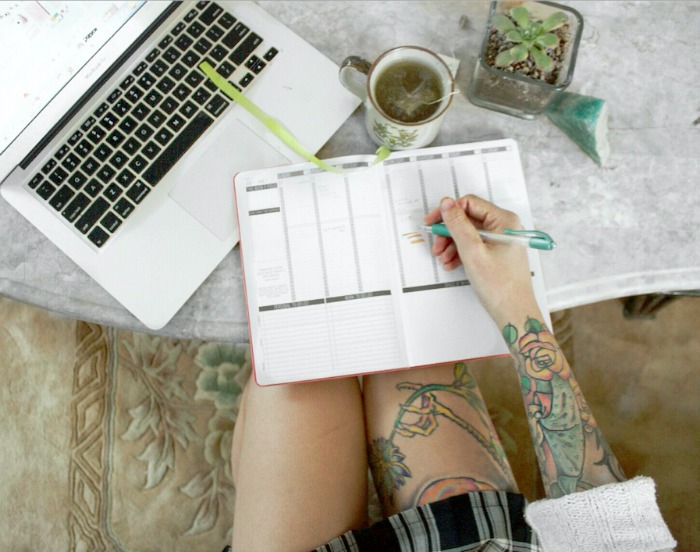 Tools of the freelancer trade.

My last day working a full-time job was Dec. 16.  I mostly approached that day with trepidation. But after my first weeks of self-employment, I’m surprised by how well it suits me. Here are some other things I didn’t see coming.

People tell me I seem happier.

Since last May,  I’d been working 9-to-5 while also building my freelance business. Deadlines and stress galore–and it wasn’t just affecting me. Bryan said I’ve been pissy, rude and unpleasant for the last few months. It was so bad that he asked friends for advice on how to deal with it, and had nightmares about me never quitting the 9-to-5. On the first Monday that I didn’t go to the office, he and our friend Andrew both commented on how much happier I seemed. Which was surprising, because I didn’t realize what a toll overworking was taking on me or the people I care about.

I am far likelier to make plans with friends.

When I worked at an office, I craved time at home with my cats. I could sometimes carve out a quick coffee run with a friend during a lunch break, but usually I was too tired after a whole day at work to do much more than cook dinner, drink and watch Bojack Horseman when I got home. Now, I really enjoy excuses to get out of the house and catch up with people. I’m becoming way more social, and it feels great to spend a couple hours in a coffee shop or swimming at the Country Club on a weekday.

I got another gig.

One of my big fears was that all my freelance work would dry up the second I handed in my notice. This is kind of obviously irrational. In fact, not one but two editors contacted me last week congratulating me on taking the leap to freelance and asking if I’d like to do some work for them. The answer was a resounding HELL YES. One of the most unexpected things about a meeting I had with an editor last week: when she mentioned the writing of mine she most admired, it wasn’t a sparkly portfolio piece or anything I’d done for national outlets, stuff that I would THINK is the most impressive. It was the personal, day-to-day stuff that I’d shared here, on my blog. Which is surprising but also awesome.

I learned the tough lesson of invoicing.

Invoicing is one of the banes of my freelance existence. I have been pretty lax about it, because I didn’t depend on the income while I had a full-time gig. Also, I was so slammed that invoicing was very low on my priority list. One of my clients hadn’t been invoiced since SEPTEMBER (!!!), and when I went through deposits and invoices for another, I found that there was a huge discrepancy between what I’d billed and what I was owed. As in, I had only gotten half of the money I’d invoiced for since August. Yikes. This is not something I ever had to deal with as a full-time employee. More than ever, I appreciate the clients who may not pay a ton of money, but who pay on TIME.

I don’t miss the office environment at all.

During my last days at Gambit, I’d find myself bullshitting in editorial meetings with smart, funny writers or listening to graphic designers rip the page proofs off the walls after the book was put to bed on Friday evenings and thinking, “Man, I’m really going to miss this.” But I don’t. I don’t miss anything about the environment. I don’t miss the structure that it brought to my life. I don’t miss having to stay until 5:30 or 6 p.m., even if my work was done before then. I do miss the people, though, and I miss my computer, which is better than the one I have now.

Last week, I spent the night at my grandmother’s house in Baton Rouge with my sister Laura, who came down from Memphis for a visit. Her boyfriend showed up, which was unexpected–we thought he was still up there dog-sitting. But no, he’d decided to buy a ring, rent a car, drive down and pop the question. He figured Laura and my grandmother would be the only ones to see him drop to one knee. He did not expect me to be there at 4 p.m. on a Tuesday.

Normally, I wouldn’t have been. I would have been at work.