My dad was a running man. He ran marathons: one, a long, winding course through downtown Baton Rouge. Another time, a pin-straight shot across the Lake Pontchartrain Causeway’s 24-mile stretch of concrete, into a brutal headwind. He ran to my grandmother’s house for lunch on Sunday afternoons, a six-mile jog that ended with him stretching his tan, hairy legs on a garage tool cabinet. In 1984, he ran the Crescent City Classic, a 10-kilometer race, in 42 minutes.

I was four years old at the time, and my mom said one of my wishes for when I grew up was “to run with Daddy.”

By the time I started running (quite by accident; you can read about it here), my dad had long since stopped. He’s neither encouraging nor disapproving of my newish running habit. I’m sure he knows how masochistic distance runners can be, and it’s probably not a fate he wishes upon me with any enthusiasm. But he does seem mildly curious about my training and finish times.

He doesn’t show any interest in picking up running again.

A little over a week ago, I ran the Crescent City Classic. I didn’t seriously train for it. It’s just 6.2 miles, about the same length as my weekly long run. Not a big deal. My time was 56 minutes and some change, and I now regret not running for speed. I made 752nd place; I think I could have broken the top 500 finishers with a more disciplined approach. My dad came in 352nd out of more than 20,000 racers in 1982.

The guy who won is a champion runner from Kenya, and he finished in 27 minutes, 44 seconds. Four-and-a-half minute miles. It’s crazy to me that there’s a race where I can run alongside a champion and a guy dressed up in a banana costume and we can all have a pretty good time.

I wore my dad’s race shirt from 1984. It got a lot of love from other runners. Some of them even remembered the race. I don’t. I was too young. But I was there. 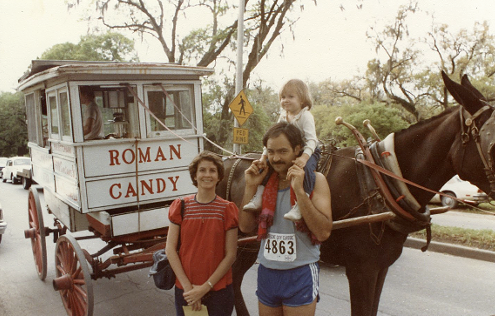