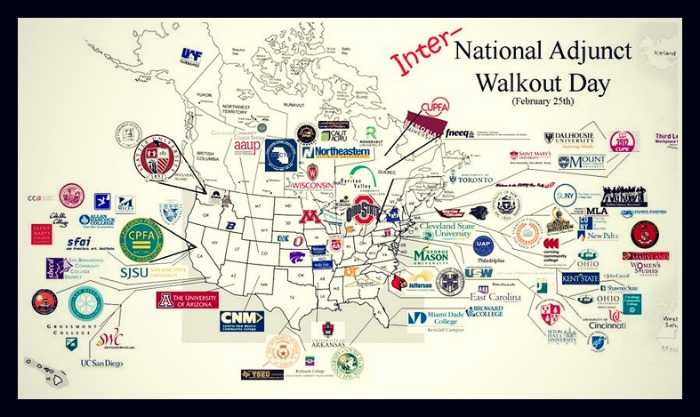 On Wednesday, Feb. 25, adjunct instructors  will collect their texts and gradebooks, put down their dry erase markers and Walk Out of university classrooms nationwide. The purpose of National Adjunct Walkout Day is to protest the low wages, job insecurity and lack of benefits endemic to this field.

This event is about changing the conversation, San Diego Free Press reports, from “‘why don’t they just get another job?’ to ‘why does a system that claims to value education exploit 75% of its faculty?’”

The obvious answer to the latter question is because they can. Higher education budgets have been slashed in Louisiana and beyond. Departments are being eliminated. Full-time professors are being replaced by fleets of part-time, contract workers who are ineligible for benefits. In short, schools are fucking adjuncts over. But adjuncts have no control over that. They only have control over what they do. So “why don’t they just get another job?” remains a salient question. Adjuncts should Walk Out not just on Feb. 25, but every day thereafter.

I walked out, and it was one of the best decisions I ever made.

For two of the six years that I taught at the university level, I was an adjunct. I adjuncted in English departments at Delgado Community College in 2009 and Baton Rouge Community College in 2005-2006. I was paid $1,800 a section. My fellow adjuncts, who trundled from campus to campus, warned me that the job was “designed to burn you out.” I wasn’t eligible for health insurance, though I did qualify for the Earned Income Credit on my taxes. One semester at Baton Rouge Community College, my classes were cancelled days before the semester started due to low enrollment, leaving me scrambling for a job. (I found one doing invoicing for a plastic hangtag manufacturer.)

I lived below poverty level. But I was aware that mine was a voluntary poverty, which in itself is a luxury. I had a master’s degree. I could have taught high school. I could have gone into PR. I could have been a copywriter. All those jobs offered a living wage, consistent employment and health insurance.

I didn’t take those jobs because at that point in my career, the time to focus on writing was more valuable than a steady paycheck. I savored the freedom and flexibility adjuncting provided. Adjuncting meant I worked 15-20 hours per week. (I only taught two or three sections, and I became remarkably efficient at planning and grading.) It meant I could cancel class without repurcussion. It gave me summers off (or, if I was teaching summer sections, generous bumpers of free time before and after the semester started.) Perhaps more importantly, it gave me an identity. And credibility. I didn’t have to tell people I was a barista who was endlessly tinkering with a manuscript. I could say, “Hi, I’m an instructor at Local College, and I’m working on a novel.”

In a lot of ways, my adjunct instructor job was an arm-candy boyfriend I could bring to parties to impress people. The trouble was, that boyfriend didn’t actually give a shit about me. Or our future.

When I started thinking hard about my career in academia, the stats foretold a bleak path: budget cuts, tenured professors who weren’t retiring and a market oversaturated with ambitious PhDs freshly minted from better schools than mine. I would almost certainly have to leave New Orleans to find full-time employment, which I wasn’t willing to do. And if I was really honest with myself, I knew I wasn’t adjuncting because my lifelong dream was to become a college professor. My lifelong dream was to become a writer. But that seemed impossible. Being a college instructor was the next best thing, sort of.

Until it wasn’t anymore. So I cut ties.

There was a rough adjustment period similar to what I’d imagine most new college grads face. Then I landed a 9-to-5 job with a salary, benefits and health insurance. The biggest downside: I only get two weeks vacation a year, and I’m jealous of my friends who teach or are in grad school. But I’m happy to have found a path that’s a much better fit for me.

Higher education needs reform. Universities are poorly administrated at best and exploitative at worst. The questions National Adjunct poses are important ones:

Are you asking why, as tuition has risen at unprecedented rates, instruction allocations have gone down?
Are you asking where student fees are going? How much administrators are earning? How much money is being spent on building projects, athletics, and aesthetic upgrades?

I encourage among adjuncts an inner dialogue to complement the public dialogue we’ll have on Wednesday, Feb. 25. Question your presence in academia, question your motives, question why you continue to work for an exploitative institution.

And remember, you are smart and driven and you probably have a master’s degree. You have other options. A whole world of options that people without college degrees do not have.

Walk out. And don’t look back.