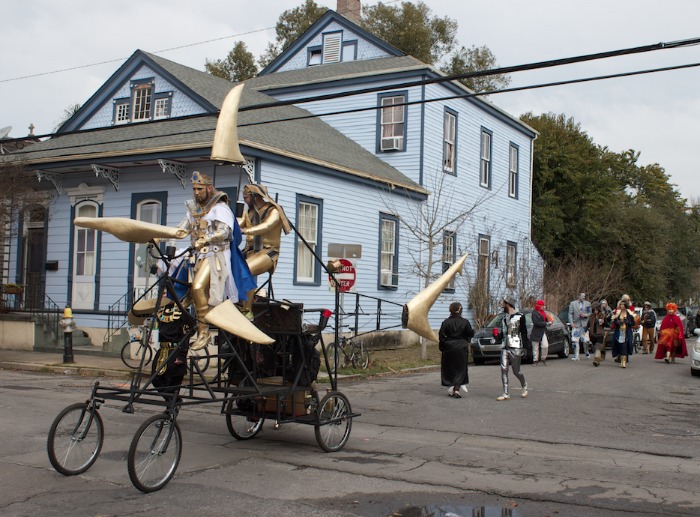 Cool fish-bike. Plus, I used to live in this blue house.

Man, I am sore, burned out and suffering from king cake withdrawal right now, but I’ve got to say, Mardi Gras 2015 was the best Mardi Gras yet.

I marched in four parades with the Gris Gris Strut flag corps this year:  Sparta, Druids, Krewe d’Etat and Thoth. Luckily, we didn’t get rained on once.

I absolutely love marching in parades, mostly because they’re exhausting and beautiful in a way that’s like a little microcosm of life itself. I have some pretty deep religious moments during the parades, especially when I’m marching down Canal Street and the wind is whipping proud little tut tut sounds from my flag, and the crowd is going batshit insane because IT’S CARNIVAL which means literally FAREWELL TO THE FLESH which means basically YOU’RE ALL GOING TO DIE but right now YOU’RE ALIVE and PROBABLY DRUNK.

and all this translates basically to WOOOOOOOO!!!!!! 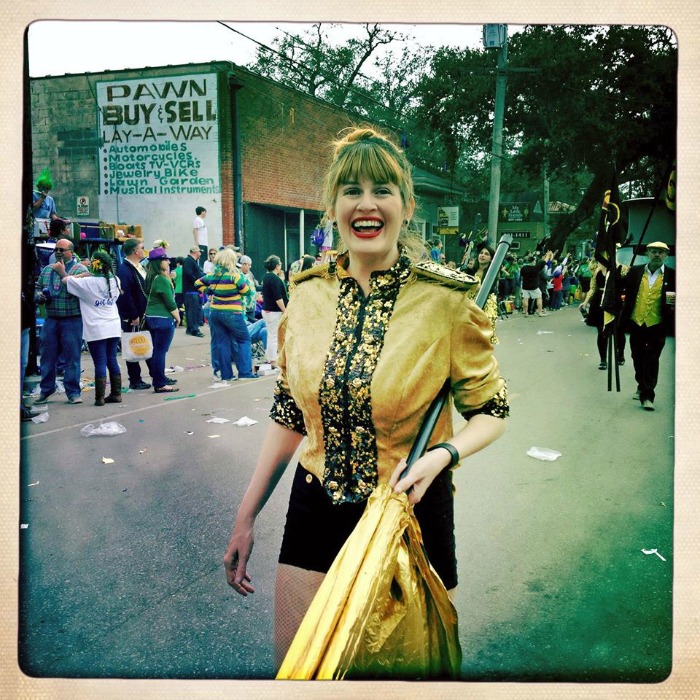 Photo by Carlton Mickle (www.carltonmickle,com), who I was happy to see on the parade route

So I did that four times, which was freaking rad. On Saturday, Feb. 14,  I biked with Bryan to our friends’ Zach and Deidre’s house in Mid-City to watch Endymion roll. The whole neighborhood was a block party. Then we biked home and made pizza, ate chocolate and drank wine because it was Valentine’s Day, too, even though everyone sort of forgot about that because ENDYMION.

Sunday, Feb. 15,  I marched in Thoth. At 6.2 miles, it’s the longest parade route. Over the week, I walked/danced more than 50 miles, either getting to parades, marching in the parade or walking home from the parades. After Thoth, 16 of us went to Juan’s Flying Burrito for double margaritas and Mexican food. The awesome waitstaff not only split our bill 16 ways, but also gave us free shots. Thanks for the Samedi Gras love, Juan’s!

Monday I went to work and skipped the parades, because it was cold and rainy and I had to wake up at SIX A.M. on Mardi Gras day. A lot of out-of-towners don’t realize Mardi Gras starts at the crack of dawn. Bryan and I raided the costume wardrobe and arrived at Jenn and Mel’s house, where our hostesses had provided mimosas and whiskey-laced coffee and I forget what other alcohols, along with Marmite-topped pastries. Excellent pre-gaming while we waited to catch St. Anne. 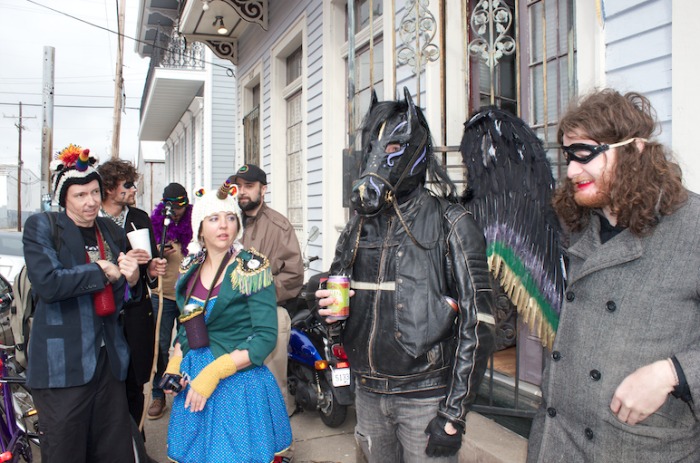 Hanging outside Jenn and Mel’s house 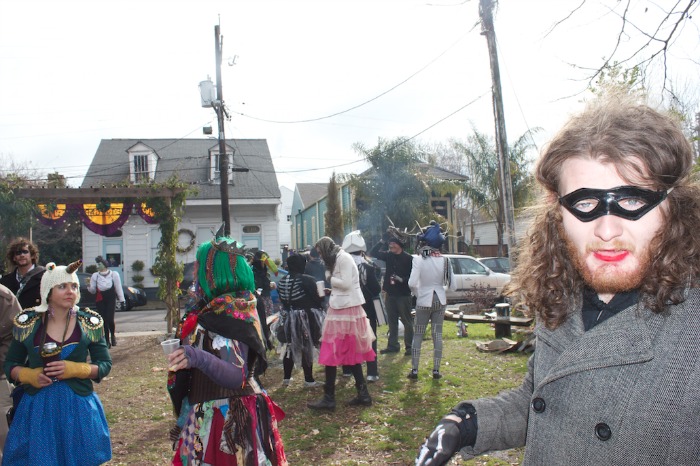 Then we walked to Basin Street to watch Zulu, and BRYAN CAUGHT A COCONUT!!!!

Then we walked to Canal Street and St. Charles Avenue, running into tons of friends and amazing costumes along the way. My mind is blown when I think about how many people in New Orleans are secretly sewing sequins to bustiers and hot-gluing silk flowers to wigs at any given moment. We watched Rex roll by and listened to a police officer grouse: “Time and a half, brah. It’s the only thing that makes this worthwhile.”

By 2 p.m., we were starving, so we ate greasy pizza at Mardi Gras Zone because Pizza Delicious was closed. We walked home and took naps and then made two more pizzas. (I was really craving pizza), which we devoured while watching The Meeting of the Courts. I fell asleep before Rex met Comus, but whatevs, I got enough scepter action to last me until Mardi Gras 2016, I think.

So that was Mardi Gras! And now I’m super sad it’s over. What did you do for Mardi Gras day?

P.S. I didn’t take a ton of photos, but my neighbor Josh Hailey did, and they are totally worth checking out.