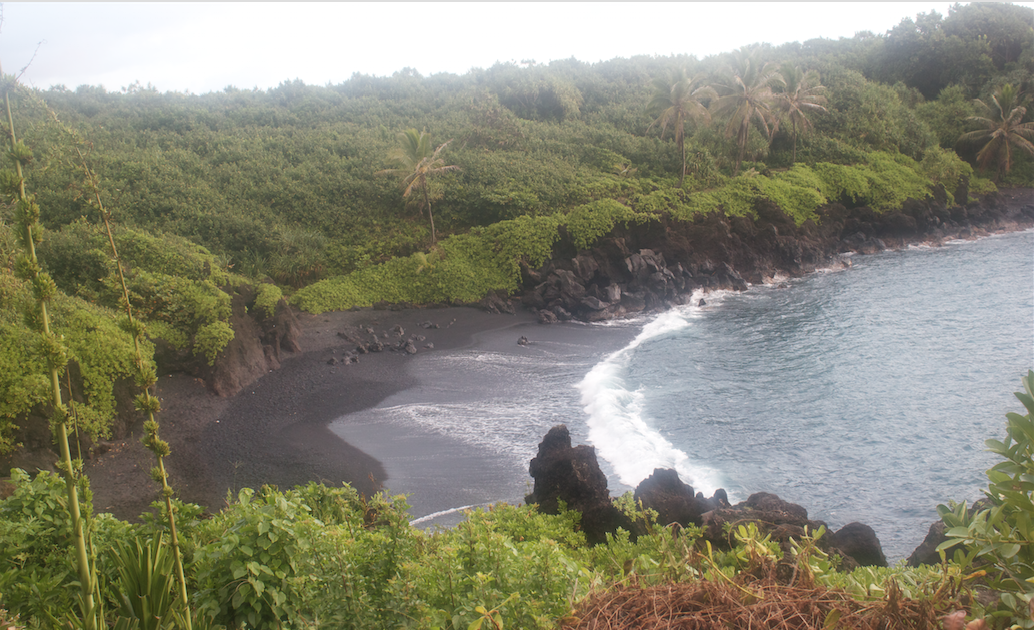 We camped by this beach.

Last month, Bryan achieved his goal of visiting every state (except Ohio, because he hates it). Hawaii was the last state he visited, for obvious reasons: it’s far away and expensive to visit. HOWEVER. It’s not as expensive as you might think. Bryan and I spent less than $600 each on our weeklong trip, and if we had planned better, we could have done Hawaii on even less. Here’s how.

1. We opened AAdvantage Mastercards when they offered 40,000 free miles as an incentive. (The cards are still available, but now they’re offering only 30,000 miles.) Because we used bonus miles for our tickets, we only spent $14 for the flight and $90 to pay the card’s annual fee. Granted, these were red-eye flights with two connections, and finding dates that worked with my vacation time and weren’t blacked out was like some weird Rubik’s cube puzzle, but you can’t beat an almost-free ticket. Flight cost: $104 each

2. We booked a hotel in Honolulu ($150 via Hotwire) for our first night on Oahu. We arrived in Honolulu at 6 a.m. and took the number 52 bus to get from the airport to downtown. Then we asked for a transfer to the 54 bus and took it along the coastline of Oahu, ending in at the North Shore, a cute spot with shops, restaurants and a wine store.  This bus line is basically a scenic tour of Oahu for the price of a fare, and we could have stopped and checked out any number of beaches and parks along the route if we hadn’t been bone tired. The bus trip to the North Shore was a little over two hours each way. By the time we’d eaten breakfast, taken the bus and gotten coffee, it was time to check in to the hotel and SLEEP. Cost $2.50 in bus fares. That night, we went to a cheesy hotel bar on the beach (Mai Tai, $12) with all the tiki torch and lei action. Hotel, bus fare and hotel drink: $89.50 each 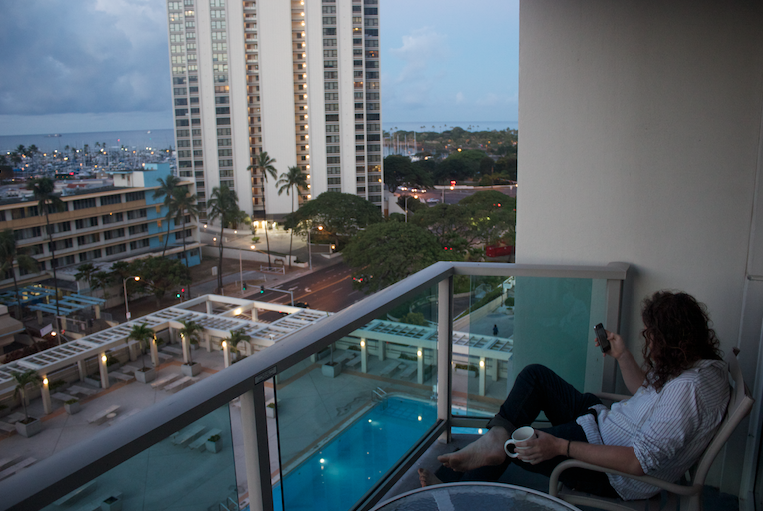 3. The next afternoon, we flew to Maui on Hawaiian Airlines. If we could do it again, we might fly directly to Maui to save that expense. However, I’m still glad we got to see Honolulu. We bought these plane tickets last-minute (a few days ahead of time) and paid $196 each.

4. In Maui we picked up our rental car, which we had booked through Hotwire. Car cost: $150 for five days, or $75 per person. You DEFINITELY need a car for getting around Maui, but we could have done with just public transportation in Honolulu.

5. We drove to the nearby Costco for food and a box of wine. People say Hawaii is expensive, and I did find it marginally pricier than New Orleans (but the sales tax is far lower). However, Costco prices are the same at all their stores. We bought peanut butter, pita bread, a couple dozen apples, individually wrapped cheeses, a vat of hummus and a box of wine—plus other sundries—for $70 ($35 per person). 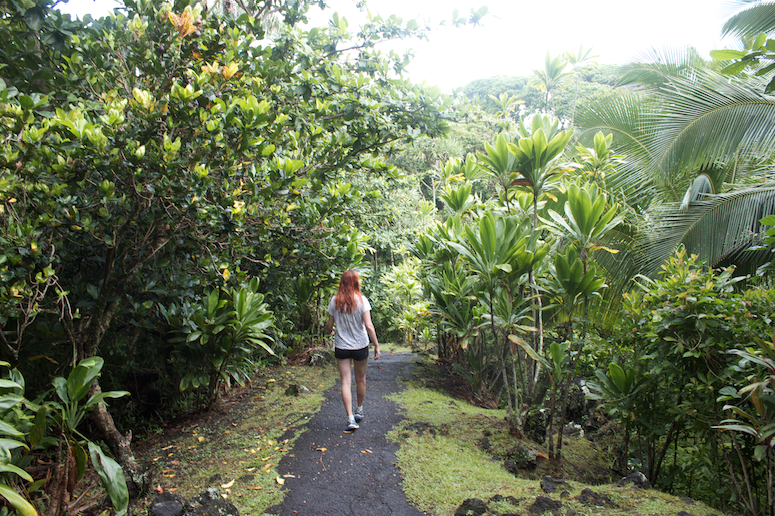 Yours truly, hiking to a cave.

6. We drove the Road to Hana—52.8 miles of winding, terrifying, beautiful mountain roads with scenic overlooks and waterfalls galore—to arrive at Waianapanapa State Park. Definitely camp there if you like deserted black sand beaches and functional restrooms and showers. Book through the government website (be sure to do so well in advance) and print the permit out. Make sure to attach the permit to your tent, because rangers are diligent about checking. (They were less diligent about other things, like enforcing the no-booze rule.) Camping cost: $90 for five nights, or $45 each 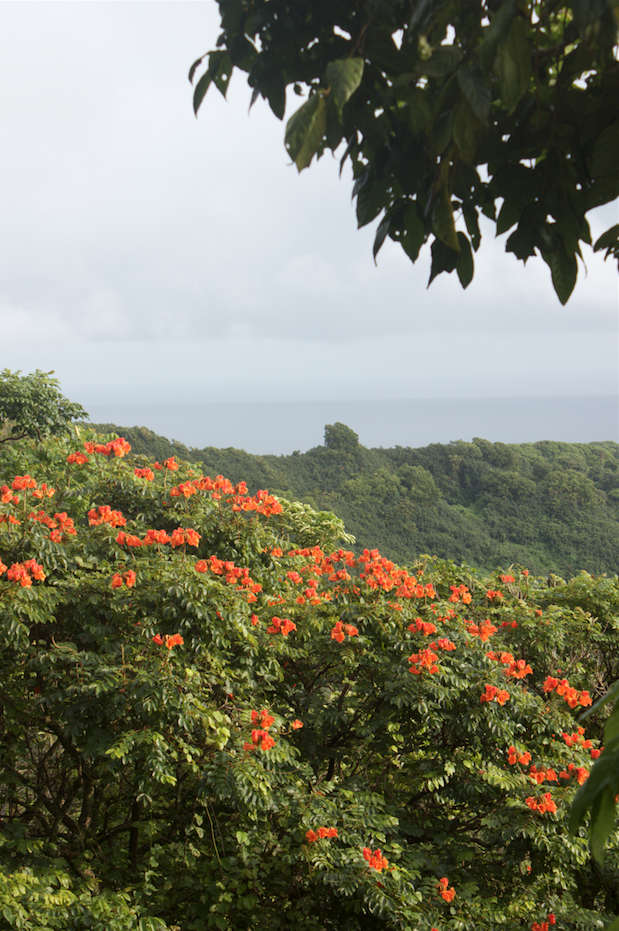 An overlook on the road to Hana.

7. We spent the next five days swimming, hiking, charging our cell phones at a beachside community center that that called itself a bakery/coffee shop but was nothing of the sort, exploring the lava tubes, caves, trails and red sand beaches. Maui’s best cuisine comes from roadside fruit stands and food trucks. We especially loved The Surfin’ Burro ($6 for a generously sized fish taco). We stopped by the Garden of Eden Botanical Center ($15 admission), and it was well worth it. Food & sundries: $33 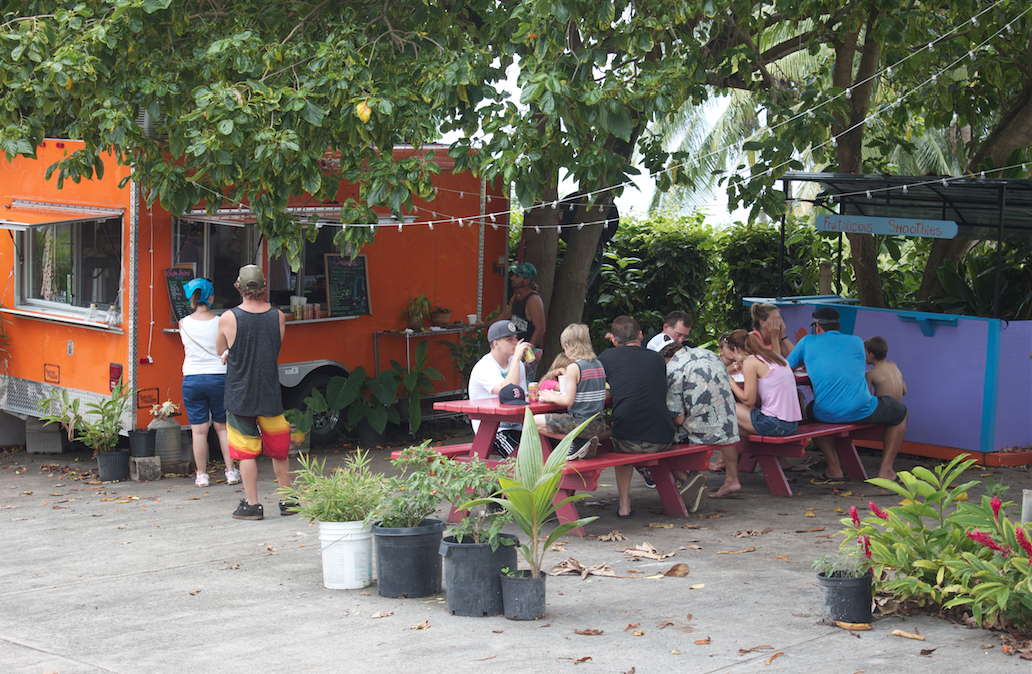 Those were all our major expenses. We could have done Hawaii for a lot cheaper, for around $300 each, if we’d flown directly to Maui, camped every night instead of getting a hotel and eaten just Costco grub.  Also, full disclosure, the last night we didn’t camp; instead we stayed in a surreal, gently decayed but sweet 1960s era hotel in Maui (price $75 for the night, total, or $37.50 each) that was closer to the airport and farther from the terrifying mountain death road. I’m glad we spent the money we did, though. It was awesome.