Last week, I wrote about being an Airbnb host for Gambit. You can read the essay here. I tried to honestly depict, in 800 words, what it’s like to have strangers present almost constantly in my house. I wanted to answer the questions I’d had before I started hosting, so that if readers were considering their own Airbnb side hustle, they’d walk away more informed.

Well. It was pretty much a shit show. There was this… 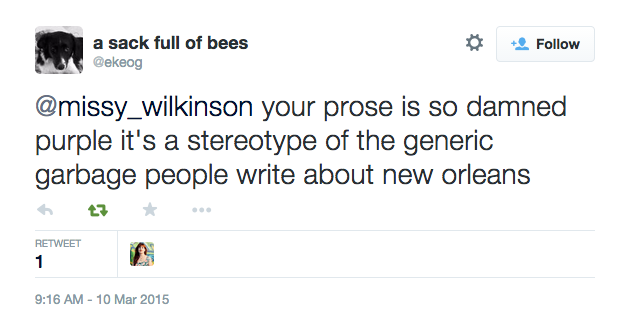 And a lot more Twitter vitriol (Twittriol?). AND I just found this reporting Robert McClendon did for the Times-Picayune…about my writing. Read it here.

When I wasn’t hunched over my computer scowling and sizzling with adrenaline, I was pleased. I wrote something and people read it and felt things, even if it was only their “head exploding” because of how bad my writing is. I have never, ever gotten this much Internet hate, and it was kind of awesome. Also, the haters have valid points. “Life-giving sediment” is WAY overwritten. I’m pretty embarrassed I didn’t edit myself better. McClendon points out I didn’t address the illegality of Airbnb, which does bear mentioning. So I’ll do that now, in this here blog.

I do a lot of illegal shit, like most people. I run stop signs, smoke weed and illegally download movies instead of paying $15 to see them at The Shops at Canal Place. SOMETIMES ALL AT THE SAME TIME.* Airbnb is definitely among my favorite illegal things to do, because it’s making me rich. The question I ask myself before undertaking any questionable activity isn’t whether I’m obeying the law, but whether I feel I am making a moral choice. Whether I am Doing Unto Others as I would have them Do Unto Me. So, if ALL my neighbors were to all start Airbnbing their houses, would that be, like, cool with me?

Obviously, I’m going to say yes. But it’s a conditional yes. And the condition is a strong one.

San Francisco recently passed legislation stating Airbnb operators “must be the Permanent Resident (owner or tenant) of the residential unit that you wish to rent short-term.” Operators have to register their unit with the county, and they’re limited to one. I would love to see a similar ordinance in New Orleans. But we don’t have one, and according to reporting by my colleagues and homie gs Kevin Allman and Alex Woodward, “the issue is off the front burner for now.”

Until then, locals have to let their conscience, an entity as whimsical and occasionally drunken as New Orleans itself, be their guide.