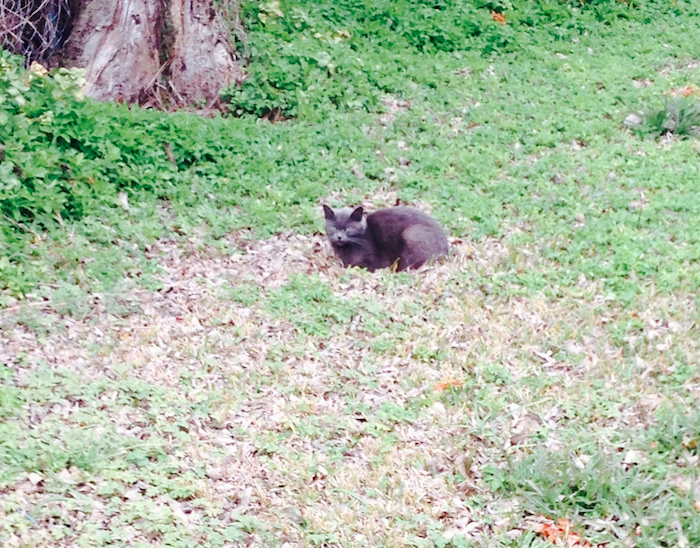 A few months ago, I noticed a young gray cat hanging around the house. He (or she?) spent his days lounging on the porch or deck. Unlike a lot of other neighborhood cats, he didn’t flee at the sight of me. Sometimes I’d bring a book out to the porch and we’d chill together.

In December, Bryan and I started feeding him. We set up a routine: around 6 p.m., we’d put out a food bowl. Gray the Cat (as he came to be called) learned the routine pretty quickly. It was almost like having a pet cat. A pet cat that wouldn’t let you near him.

But the other side says it is possible to socialize a feral cat with time, patience and a specific set of practices. Multiple people report socializing multiple cats with great success.

It would have been easier to go to the shelter to adopt a cat. But Bryan is smitten with Gray the Cat, and I too am susceptible to his charms.  So on Wednesday, when Gray the Cat sauntered in the house expecting his dinner, I closed the door behind him.

Gray the Cat went batshit, jumping from window to (closed) window. Then he settled himself by the door and glared at me. I left to buy food and cat litter. When I returned, he was ensconced in a lair under the couch. For the first 24 hours, that is where he remained. He didn’t come out to eat or pee. (I’m pretty sure he peed under the couch, but you’re not supposed to disturb the lair.)

I trapped Gray on Wednesday. On Thursday night, when I was at flag practice, he emerged to eat and drink. This was a relief: Gray wasn’t on a hunger strike.

On Friday evening, he emerged from his lair while we were making pizza, but very briefly. That night, he shat in the kitchen and pissed on the couch. I’d read that feral cats don’t understand the concept of a litter box, and that it helps to mix dirt, leaves and some of their poop in with the litter so they understand, THIS IS WHERE YOUR CRAP GOES.

I did that and put the litter box on the couch pee-spot, and last night, he shat in the box like a good cat. Today, JUST NOW, he emerged from the lair and had a stroll around the house before retreating. This seems like a big step, because a lot of the cat socialization blogs report that it usually takes a couple weeks for them to feel safe enough to do that.

So, that’s where we stand on the Feral Cat Socialization Experiment. More updates forthcoming.