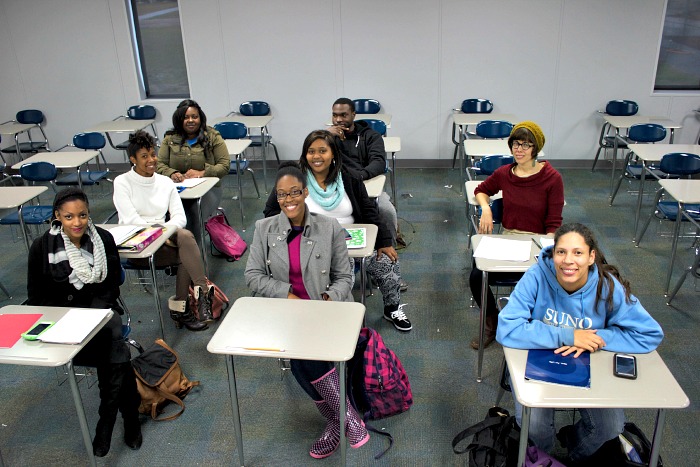 Last week, my friend (and poet extraordinaire) Jenn Nunes invited me to the fiction workshop class she teaches at Southern University New Orleans. We had an awesome and provocative conversation about writing. But don’t take my word from it! Here are some highlights.

Me: This question is important, and I see it asked a lot at writing conferences. If you are writing for children as well as an adult, explicit audience, you probably want to keep your personas separate. But keep in mind the danger is you divide your efforts. When you have two different names, you can’t cross-pollinate with the readers from each of these groups. You’re dividing up your efforts against yourself.

Ronnie Surtain: You can’t be Dr. Seuss and be writing Zane books, but if it was me, I wouldn’t change my name. I want to be represented, whether it is a children’s book or a horror book. People are trying to keep up with you.

Me: I’ve seen so much emphasis on transparency, which is being honest about all these facets of your life that you might otherwise keep hidden. We all have different facets. When you have this fake name, it’s hard, you have this secret and are afraid of it. It takes a lot of courage to [be transparent].

Ronnie Surtain: As a DJ, I can’t promote one name and then come out with something under another name. Under another name, It’s not getting no love. People like what they know. They feel like we’re making some kind of connection. The more they know about you, the more they want to know.

Me: And people expect to know everything about you now, if you’re a writer, which is a public figure.

Jenn Nunes: Can you say why you chose to write about Tao?

Me: I started seeing a therapist here in New Orleans probably four years ago because I was stressed out from work and from my boyfriend, who had a terminal illness that he later died from. Also, the way I thought about things seemed illogical to people. So I talked to her about it for the first time. I looked on the internet for stories by people who had gone through something similar, because I thought it would help me. But I couldn’t find very many. So I thought, “Let me write this, because this is a story I would want to read, and I know a lot of people are in this position.” I wrote it quickly and they accepted it. It was extremely therapeutic, because I had already been in therapy for it, but it was still a secret I had. And when I told that story to such a large audience, it was not a secret at all. That was tremendously liberating.

Lauren Robinson: When you write fiction, do you write for it to be therapeutic or entertaining?

Me: When I’m writing to sell something, like a book to a publisher or an article for a newspaper, I’m always writing to entertain. That doesn’t mean it’s not informed by experiences I’ve had that might have been good or bad. I almost always process things by doing some kind of journaling, but that doesn’t normally make it to the end product. I feel like it is still there and influencing my stuff because it is a part of me. But when I write for other people, I am writing to entertain them or teach them something. Not so much to process something myself. That is something I do only with myself or my therapist and whoever. But this is a good question, because writing is cathartic.

Lauren: It very much is. That’s why I started writing poetry, because it’s easier for me to write it than talk to someone else about it. … I am not a happy writer, even though I’m a very happy person. But all my writing seems to be inspired by upset and anger.

Me: And poetry, confessional poetry is a thing I don’t know about. So Jenn would be a good one to talk to about that. For you, it might be more cathartic.

Me: First, congratulations on wearing so many hats as a writer. That is really important for building your platform.

Maci: I like blog journalistic writing. I’ll tell you what’s going on, but I want to tell you in my voice and with my opinions. In the newspaper, you can’t take a side. With my school paper, I wrote about Bring Back Our Girls and how everyone just forgot about it. I wrote about Ferguson, and it was really hard writing that article and not taking a side. So I called it Black Lives Matter, and that’s my side. I feel like if I wasn’t at an HBCU (historically black colleges and universities), I wouldn’t be able to take that side, and that is why I don’t like journalistic writing. Because I am going to take my side.

Me: I think you should take your side. Your voice and side are important, and the mainstream press needs to have that. Jarvis DeBerry does a lot of good writing. He would say black lives matter. He says a lot of things that piss white people off. People need to know. They need to hear these voices.

Jovanda Cromwell: Are you ever nervous about how your writing is perceived? I would be nervous. I’m trying to be real, but I’m worried about how it would be perceived.

ME: I am nervous every single time I publish anything. The bigger of a risk I take, the more scared and nervous I am. I almost always feel like everything I write is bad and stupid. Luckily, you don’t have to actually be self-confident to be a writer. You have to feel terrified, but then do the thing anyway. You have to click publish on your website anyway, or email your story to an editor anyway. You just have to do it anyway.