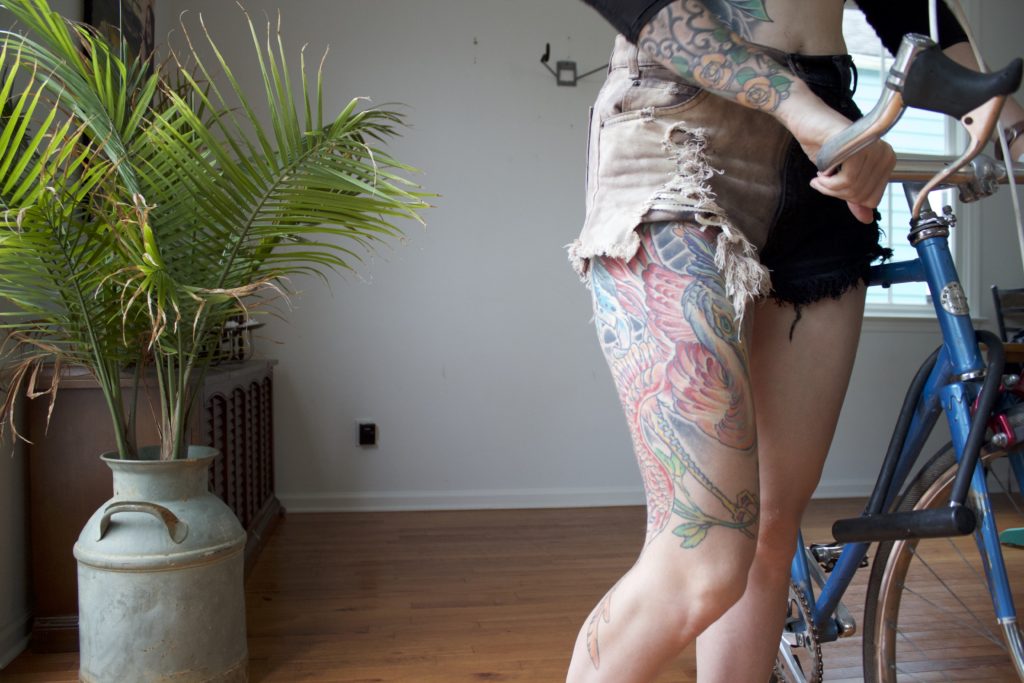 Heavily tattooed is a subjective term–some people might consider me lightly tattooed. I do have a fair amount of plain skin left. At the same time, I also have about 70 hours of getting tattooed under my belt. So I know a little bit about becoming heavily tattooed, which is an ongoing process for me.

I got my first tattoo on my hip when I was 18, in 1998. Even though I was obsessed with tattoos and worked briefly as a piercing apprentice, it was nine years before I got my next tattoo. That’s because I was in a strict new religious movement for many of those years, and when I wasn’t, I was doing work that required a blank slate, body wise. Things like local modeling, background acting, stripping and promotional work. It was more lucrative for me not to have tattoos, so I held off.

Of course, I had all the usual concerns: Will I regret this? What if people give me shit about the way I look? How will tattoos affect my job opportunities? So I didn’t get tattooed again until I was 27, and that tattoo was a cover-up of the one I got at 18. I didn’t start getting tattooed heavily and often until I was in my early 30s. I think that’s for a few different reasons, but mostly, I realized that I’ve loved and had tattoos for half my life, so I will probably still love and want them in the future. If there were a few things I could tell myself before I got tattooed, this is what I’d say.

Yes, you will regret some of your ink. I don’t love every single one of my tattoos. Some of them, I wish I could go back and change. I don’t regret getting tattoos, but I regret the loss of opportunity that comes with a new tattoo–once you tattoo over plain skin, it’s gone forever. Sometimes, I wish I could start my tattoo collection all over again.

These are my tattoo regrets: My shoulder caps. I wish I had only gotten one rose and left the other shoulder bare so I could start with a blank canvas for a sleeve someday. I sometimes wish my tattoos weren’t in color because I love the look and cohesion a body of grayscale tattoos has. I wish my side piece didn’t extend so far onto my back, because it’s going to look weird when I’m ready to get a backpiece.

The way people treat you in public won’t change that much. In 1998, when I had my septum pierced, I could hardly leave the house without someone asking me if it hurt, staring, or asking rude questions like, “Why do you want to make yourself ugly?” I thought I was in for more of the same if I got public skin, like my arms and legs, tattooed. Lo and behold, the world has changed A LOT in the past 18 years when it comes to body modification. I have never once had someone say something rude about my tattoos or piercings. Weird, huh? It’s generally only compliments. The only downside is, people do use my ink as an excuse to touch me.

You will still be able to hold a good job. I waited years before getting my forearm tattooed because even though I work at an alt-weekly, it’s fairly conservative–for example, our CEO asked me to disguise my gauged ears. Finally, I decided this was my body and I was going to do what I wanted with it. I told HR I was planning on getting arm tattoos, and they just said that was fine, but there might be some situations where I needed to cover them. It was so not a big deal. Now that I’m about to go freelance, my appearance matters even less. In fact, my next tattoo is probably going to be on my hand.

You will feel happy every time you look down at your body and see your ink. For a long time, my biggest tattoos were on my back, torso and hips, hidden by clothes. I thought the fact that I had extensive, hidden tattoos made me a secret badass, unlike those people who flaunted a tiny public piece on their wrist. That’s not true, obviously. Where you have your tattoos boils down to preference and life circumstance–it doesn’t make you more or less of a badass. However, I am so glad I ventured into having tattoos in more public areas, because that means I get to see them as part of my day-to-day life. I think they’re beautiful, and when I see them on me, I feel more beautiful than I did when they weren’t there.

You will create a rich, rewarding relationships with this art form and the tattooers who create it. I love looking at tattoos on other people. I love browsing through artist portfolios. I love seeing tattoos on strangers. I love the creative process of thinking about a tattoo I want for myself, drafting Pinterest boards of inspiration, researching artists whose work fits my vision, and finally, I love getting the tattoo and seeing my body slightly transformed. The whole process has brought such richness and pleasure to my life. I couldn’t imagine spending the rest of my days without it.