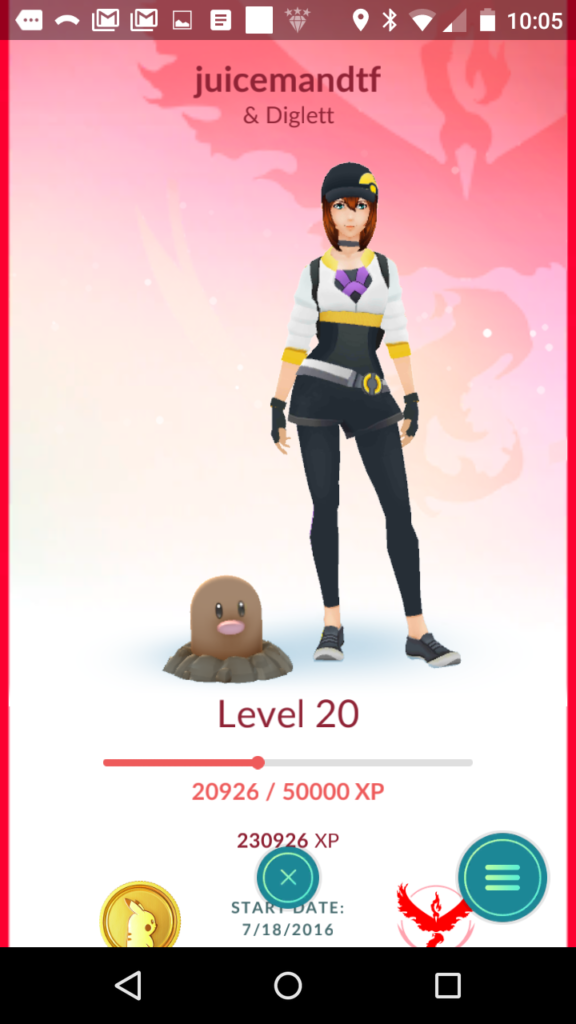 Yesterday, I walked to Frenchmen Street from my place in Bywater with Elizabet and Duane. We were on our way to Bryan’s gig at Blue Nile. It’s a nice walk, a little over a mile each way, and last night was the air felt crisp and spooky, like fall. I didn’t want to let the kilometers go to waste, so I busted out Pokemon Go. Some of us have Digletts to walk, you know? Neither Elizabet nor Duane play, but they’re both familiar with it, because the museum where Elizabet works is a gym. Anyway, I spent what is in retrospect an embarrassing amount of time talking about Pokestops, pointing out the homes of other players when we passed them and explaining the concept of location spoofing and why it’s not a good idea.

I did all this while catching numerous Rattatas and Pidgeys and collecting Pokeballs galore. It’s actually very weird to move through two realities at once–and it’s weird that most of the time, existing in a hybrid dimension doesn’t feel weird at all. Not that I’m trying to slam people for being on their phones all the time and missing out on the “real” world.  I appreciate the beauty of the real world more when I play Pokemon Go. I don’t get inured to the sight of crumbling brick roads, palm trees and pastel shotgun houses. When I look up from the blue-green grid that is the Pokemon universe, the richness and detail of the physical world hit me with new power.

I love raiding gyms on Friday nights with my neighbors, friends and family. I’ve convinced my cousin,  sister and her boyfriend to play the game and join my team (Valor). I’ve bonded with strangers ranging from children outside a library to a non-English speaking nail technician over the game–it cuts through language, class, age and race barriers the same way football does. I’ve also joined a secret Facebook group, Nola Team Valor, where accusations of subterfuge and gym-raiding strategies run rampant. Ultimately, the makers of the game have created a structure that rewards you for walking, traveling and connecting with people.

On one hand, that’s cool. On the other hand, as lots of people have pointed out, the implications of this new panopticon (Pokeopticon?) are vaguely terrifying. I’m not too worried about that because I’m already deeply enmeshed in the digital grid. What does give me pause is the layer of reality Pokemon Go creates, which encompasses participants like a caul. It contains and nurtures me, but it also separates me from everyone outside its amniotic grip. I felt that keenly yesterday with Elizabet and Duane, walking beside them but not always with them, describing things around them that they could not see.