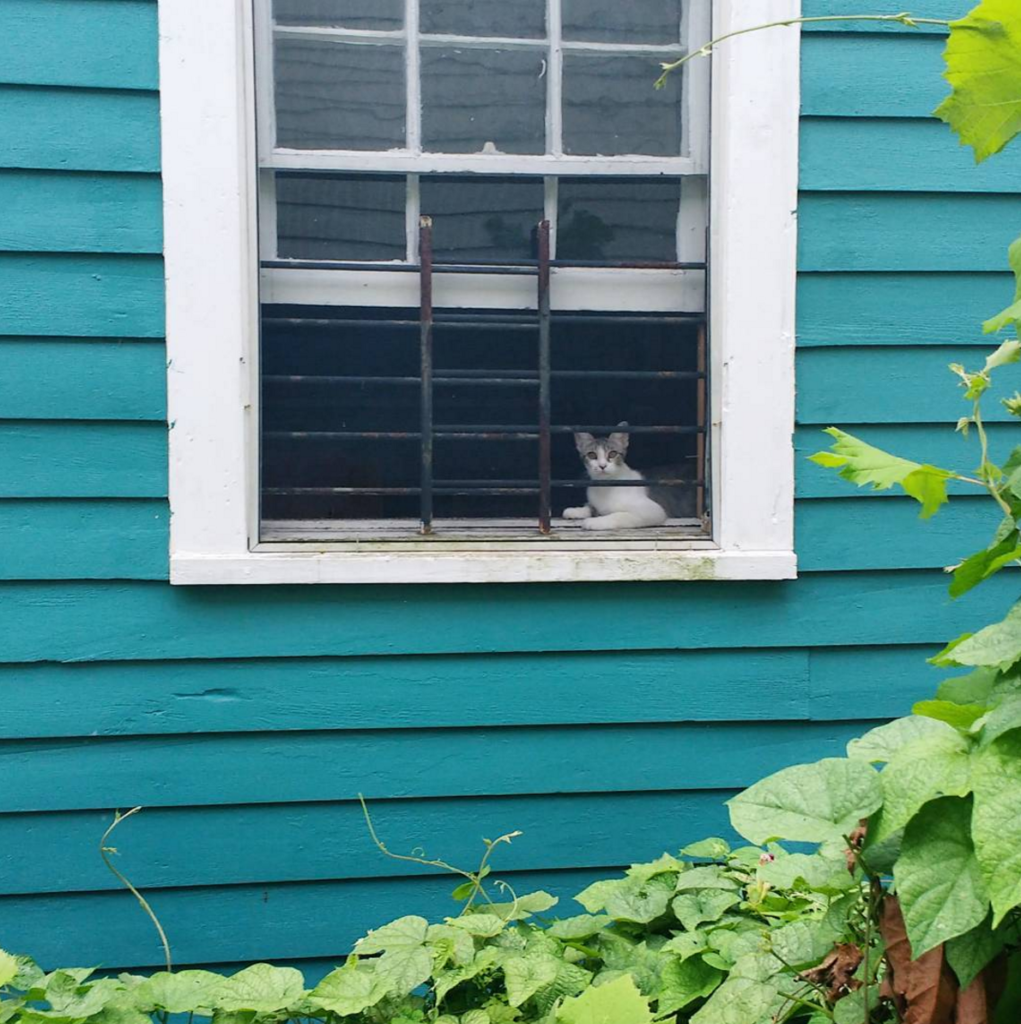 A neighbor’s attempt at taming a feral kitten, who yearns to escape.

I used to hate cats. I’d boo at them in the streets and chuckle any time a cat died in a movie. My neighborhood is overrun by colonies of feral cats who felt as dispensable as pigeons. I suspected anyone who harbored a feline in their homes of codependence. Why else would you scoop up the shit of a creature who had utter disdain for you?

That was before I had a cat of my own. Now I have two, Claude and Roland. They’re brothers and they were born in my living room. (You can read more about how that happened here.) I don’t know what’s more amazing, the fact that I passionately love these cats or the fact that the narrow space behind my saggy plaid sofa become a portal for life to tumble through. 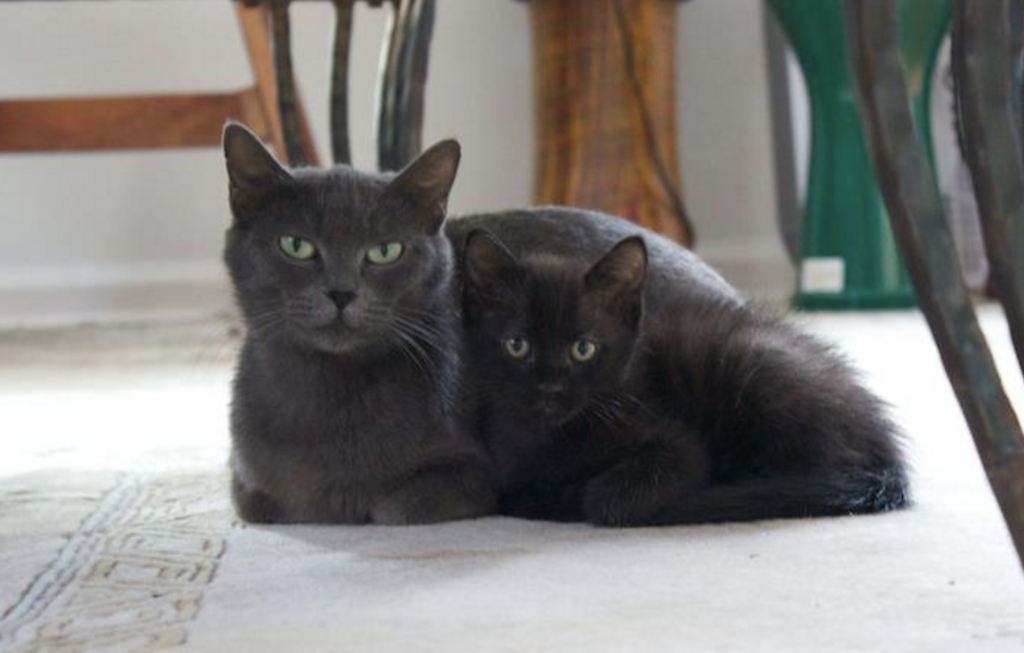 Because I love my two cats, I somehow, by default, love ALL cats. Especially the cats in my neighborhood. Claude and Roland’s mother is feral. She comes by the house sometimes, along with her brother, to eat the cat food I leave on the deck and peer at her offspring through the glass back door. These meetings are tense and marked by hissing, like most family reunions. But I like that I know my cats’ mother and uncle and presumably dozens of their cousins, who cross my path when I go for a run or walk to the corner store to buy wine. Some of them are black, like Claude and Roland; some are tortoiseshell, some tuxedo. I don’t know the Byzantine structure of their feral feline family tree, but I would wager my cats are loosely related to almost every feral cat in the neighborhood. 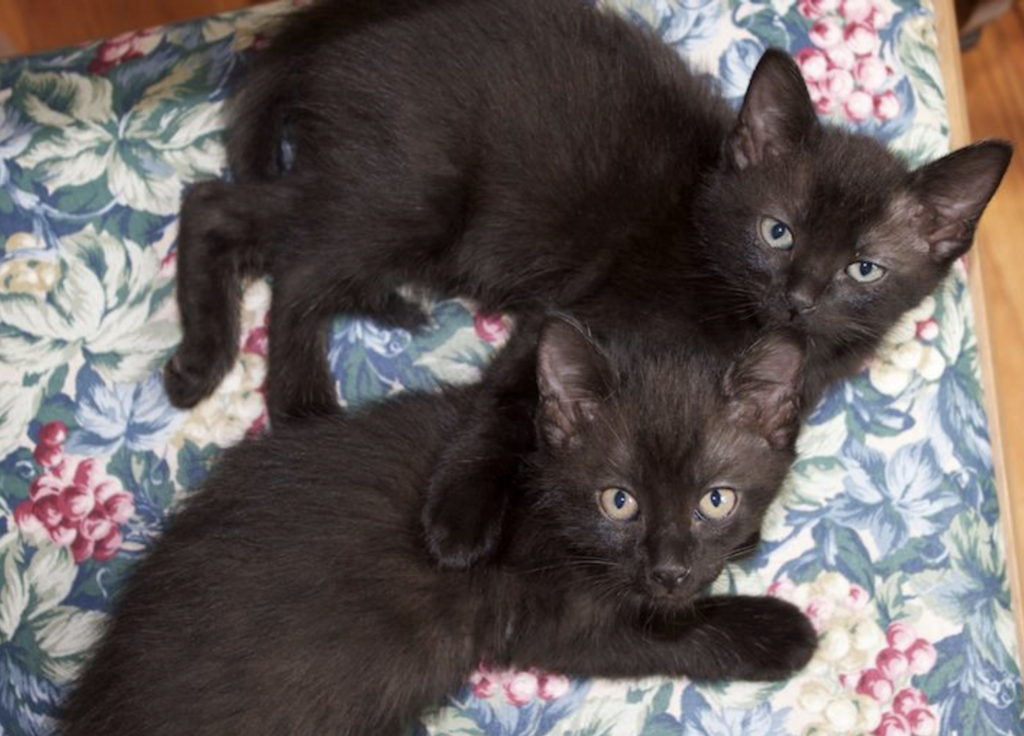 Claude and Roland as kittens.

Last weekend, Bryan and I went for a walk (well he was walking, I mostly was stropping to catch Pokemons). We saw a family of black cats on a porch– a mother and two kittens. They shrank back and disappeared under the house. But before they left, I noticed the kittens were almost exactly the same size Claude and Roland had been a year ago. If we hadn’t captured their mother when she was pregnant, they would have been born under a dumpster or in some crawl space somewhere and been terrified by our presence, the way these young feral catlings were.

“It’s a fig tree,” a neighbor yelled at us, thinking we were admiring her greenery.

“Oh, I was looking at your kittens,” I said.

“No. We already have two cats,” Bryan said, explaining the story of their birth.

“I took three,” she said with long-suffering resolve, implying we probably had room for one more cat.

Here’s the thing. I already dread the day Claude and Roland die. I picture it in my mind, calling a mobile vet to euthanize them in my home, so they won’t be too scared when the needle slips in and life drains out. Or maybe it will be something more sudden — a collision, a dog attack.

When life is taken, it often feels random and meaningless and you can’t understand why. But I never asked for these cats; they appeared under my couch and now it’s hard to imagine them not being here. Life is given just as arbitrarily, so I guess that makes it fair. 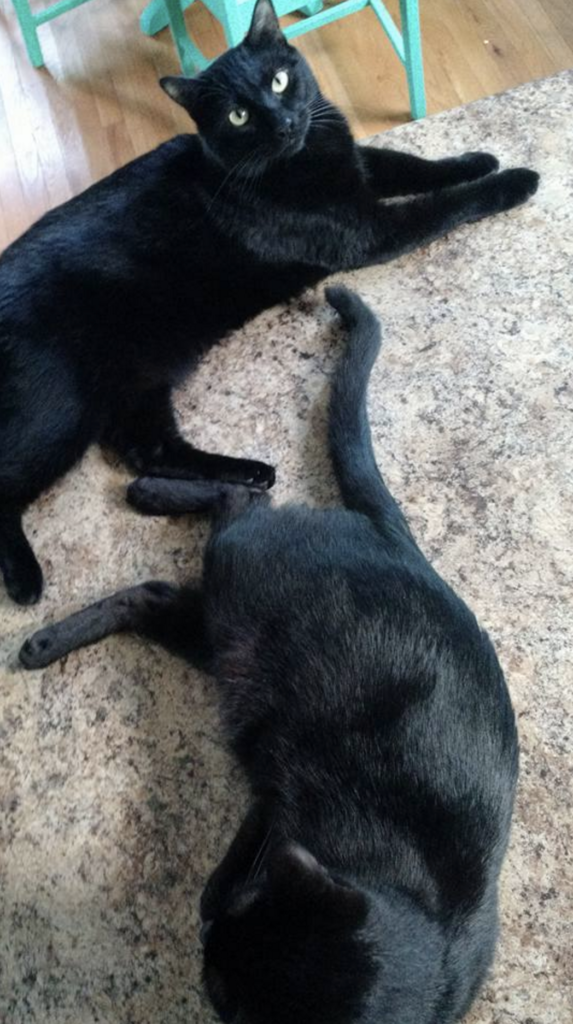 Claude and Roland are fond of playing footsy.