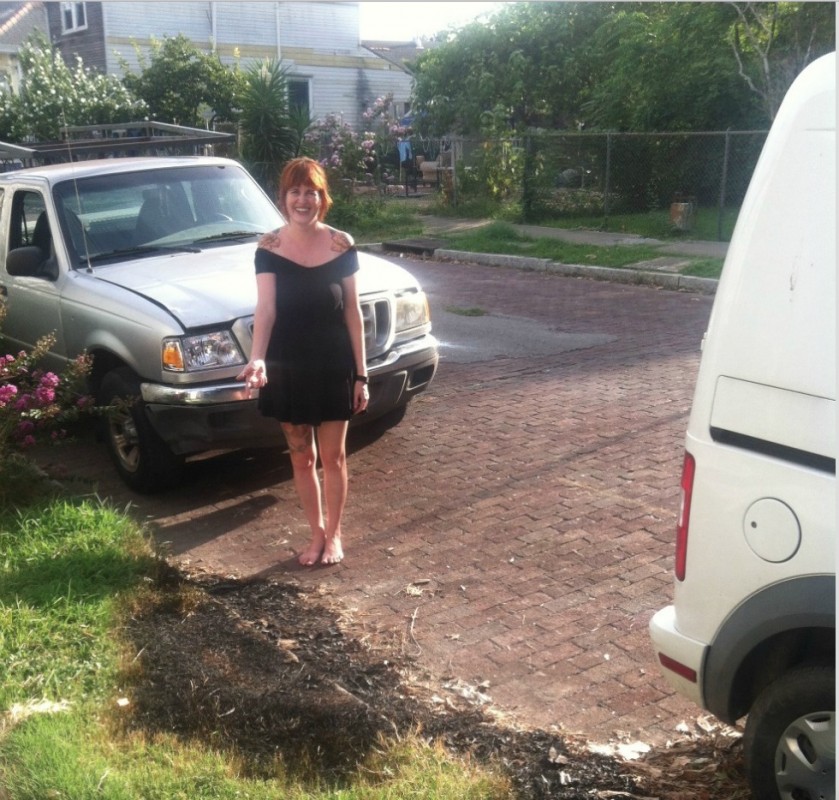 Here I am in my front yard after someone started a fire there.

I am not the greatest neighbor. I mow the lawn maybe once every few months —infrequently enough that well-intentioned neighbors have stopped by with business cards referring me to their lawn guys. I’m an Airbnb host, so there’s a constant stream of travelers in and out of my home. And I’m in a band and my boyfriend is in several, so we practice there… loudly and often.

Some people might call me a flat-out awful neighbor. But I don’t care. Because everyone on my block is equally bad, if not worse.

I don’t want to point any fingers, because I do still have to live here. But the trouble began before I even moved in, when the house was still in its construction phase. I stopped by to check out the progress and meet my neighbors Andy and Terry.

“You know someone’s been smoking crack in the porta-potty,” Andy said, gesturing toward the back yard.

Another neighbor warned me not to report the crackhead, because he or she had family in the New Orleans Police Department, and the cops wouldn’t bother showing up. I don’t know if it was the toilet crack smoker or not, but somebody broke into my house days before inspection, turned on the tap and let it run for a whole weekend. The floorboards warped; the sheetrock had to be replaced and the building had to be treated for mold. Insurance covered the damage, but it set back my move-in date by almost a year.

The problems didn’t stop when I moved in. I lock down everything on my porch —wire ropes as thick as corn snakes twine through the white wicker chairs and table. But that didn’t stop my neighbors (again, I’m not pointing fingers, though I have suspects) from stealing an extension cord, a lawn mower, countess mail deliveries (I now have things shipped to my work) and even my recycling bin.

This past summer, someone set a fire in my front yard, stole my garbage can for the second time and proceeded to dump a reeking pile of slimy, rotten leaves and empty liquor bottles in my side yard. I couldn’t even dispose of the refuse because I had no trash can. At first I thought I was being targeted, but I’ve come to believe, no, I don’t have an enemy. Just some really terrible neighbors.

I’ve spent countless hours with my favorite neighbors discussing the problems on our block. Not just the thievery or the feral cats. But also more personal problems. Such as: Neighbor A thinks the Neighbor B is a witch who murdered her live-in boyfriend. Neighbor B says Neighbor A is a “sad example of what’s wrong with our mental health system.”

Although my neighbors are, in some ways, the worst neighbors I’ve ever had, they’re actually the greatest neighbors I’ve ever had. We bond over the block’s petty thievery and bitter rivalries. I’ve been to their backyard bonfires, their searingly loud industrial music concerts and their funerals/block parties, when a second line with a brass band and horse-drawn hearse rolled down our crumbling brick street.

I have lived in a lot of neighborhoods across New Orleans, spanning 17 years, and this is the first place where I’ve not only known my neighbors, but felt deep affection for them. They seem to like me, too, and I’m grateful for that, just as I’m weirdly grateful for their eccentricities: the roaming pit bulls, the drunken profanities yelled out on dewy, rose-gold mornings. Because that means I can throw parties and play music as loud as I want to.