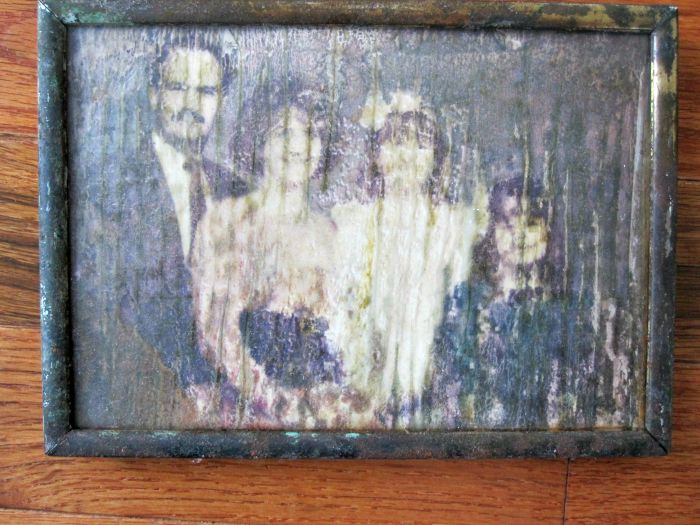 My family photo after hanging for three weeks in floodwaters. I’m wearing the bow.

The 10-year anniversary of Hurricane Katrina’s landfall and the federal levee failures is bearing down on us. If you lived through that shitstorm, like I did, you’re probably experiencing a PTSD-laced speedball of emotions: you don’t want to read any more about it, but you can’t stop reading about it. Maybe you have an urge to write about it, too.

In those weirdly sterile days after the storm, when I sat in my sister’s Baton Rouge apartment alone with my laptop and the sounds of helicopters overhead,  I wanted to record what I was experiencing. I knew that as awful as it was, I had been granted a rare opportunity as a writer: the chance to bear witness to a grand-scale tragedy. But my words sounded stupid and false. I couldn’t make sense of the storm. I couldn’t feel anything, aside from a mild sense of curiosity, like someone who’s awake during surgery and watching doctors cut into an anesthetized limb. A k-hole of consciousness with only one focal point: Huh. That’s interesting.

So I was pissed when artists and journalists descended on the Gulf Coast and spun its suffering into art like straw into gold. It wasn’t fair; it wasn’t theirs to use. I thought maybe, 10 years later, I’d have come up with something profound to say, a lesson learned, an insight hard won. But I haven’t. I feel as mute and stupid now as I did then. Maybe this isn’t wrong. Maybe this is the only way you can really react to something like Katrina.

This summer, I’ve met with two friends and colleagues, Katie Walenter and Sophie Lucido Johnson, to talk about Big K and our writing and how to tackle it and whether we want to. Both transplants, Katie moved to New Orleans prior to Katrina and Sophie moved down not long after to teach.  Katie said something that resonated with me, “I wasn’t part of the conversation last time. But this time around, I want to be.”

That’s how I feel right now. I am never going to be done with Hurricane Katrina. I’ll never write the gorgeous, meandering personal essay that lands in the New York Times and at the same time loosens Katrina’s greasy, moldy grip on my synapses and pins the experience down in a polished glass box. But with the naively hopeful idea of doing just that, I’ve been collecting journal entries, emails and other hurricane flotsam and jetsom.

So I’m going to present those bits of writing on my blog, and anyone who’s interested in them can comment or ignore them. Exhibit A is a series of emails exchanged by me and my fellow University of New Orleans creative writing workshop students before, during and after the storm. They are presented chronologically below.

Hey, let’s be walking on sunshine!!!! We’re heading out to the Shack Up Inn in Clarksdale, Mississippi — and we’ll be there making mischief if anyone finds themselves propelled northward on I-55 through what would certainly be an understandable contraflow misunderstanding…

The band is playing at Tips next weekend, provided Katrina’s waves remain modest… Drop by if you end up in the hood…

And no matter what happens to each of us, it will eventually make a great story.

Well, when Jessica Emerson demands a roll call, who am I to ignore it . … It seems that the worst is moving out of New Orleans now and that’s a huge relief.  I’m just praying for all of the people still there. I also hope we all see each other soon. And allow me to add my request for roll call from everyone…

Things are looking grim. Bill and I are glued to the TV, alternating between weeping and staring with our jaws on the floor. I miss you all and our lives and city…

PS: has anyone heard from Parker & Alison or Pete & Gia? Saw them on Sat and they hadn’t been planning to leave (as we weren’t)… Also wondering if Amanda B. made it out?

We’re trying to be enlightened and feel liberated of all our material belongings instead of sad that we lost all our shit. It’s working about 50% of the time.

Yes, I am just fine. I’ve been trying to call Jessica so I can talk to all of you, but a lot of the cell phone towers here are out.

My aunt, uncle, cousins, and grandmother were all able to evacuate; we have no idea how their houses are, though. I’m guessing that my grandmother’s house in Lakeview is under some serious water, but it is just a house.

Everything is very chaotic in Baton Rouge right now. School at LSU is cancelled until the 6th because a lot of the buildings are being used as emergency shelters. Helicopters keep going overhead. There are long lines at all the gas stations, at least at the ones that actually have gas. I still haven’t been able to see a television, but I  just talked to a guy (I’m sending this email from the LSU Union) who came from New Orleans and he said “Whatever you’ve seen on T.V., it’s worse.”

I better go, there are a bunch of people behind me in line waiting to email their loved ones.

And this has been an interesting house, sort of a way station for refugees. Nine new evacuees showed up late last night — 4 cats, 3 dogs, and two humans. It seems that a mandatory door-to-door evacuation is about to take place in New Orleans, only the officials won’t evacuate pets. I feel like the underground railroad, taking in contraband animals, feeding them, sending them on their way to points north, west, east. Good luck and godspeed.

Aside from the occasional good deed, it’s been a lot of Evan Williams and Miller High Life that gets me through all the Fox News. They like Fox News here. One more minute, however, of Bill O’Reilly telling me that the poor deserved to die because they didn’t save enough money to buy a car when they had the chance, and it’s possible I’ll snap and attack the Fox transmission tower with my bare hands. Or at least one bare hand – I can’t put BOTH drinks down.

Amanda and I are going down to N.O. on Monday with a couple of press passes. Our real mission is not so much an article as trying to save our cat and some other peoples’ pets. If anyone needs us to try and do the above with your pet, please let us know.

Love you all, and we will rebuild,

We also managed to get into Orleans with a special emergency worker pass Lee had, and it was good times until the curfew passed and the National Guard told us we would probably get shot.  But that’s for a blog entry to be written when I get back to Pensacola.

It is my fullest intent that we are going to finish fall Workshop courses, all of them through distance learning measures, as we go along in the fall. …  As I have read your e-strings over the last couple of days, I have been impressed once again of the incredible love you have for each other. Please know that I share that love for all of you. That’s among the chief reasons I want to keep workshops together through the internet this fall, so that, however far apart you all are, you can still be together.

With a swollen heart of missing for you all.

Colin and I have been home for almost a week. In this time, we’ve seen progress and despair, but the people are strong and caring and neighbors. We came in on the Hwy 11 bridge, through the shredded weatherboards and pick up sticks of Eden Isles and Oak Harbor, onto I-10, past the grey ghost towns of the East and the 9th ward, to 90 West and alongside the sky line (standing torn but firm). In a thirty minute span of time, we felt the sadness you all know, but we also felt hope. The city, in parts, is breathing– stronger than the whimpers on the national news. She’s waiting for you all.

Life is not normal, but moments here will make you fall in love with our town all over again. Yesterday, as we struggled to get a new refrigerator into our home, the FBI pulled up to help. So did the UPS man. Our garbage was picked up today, which sent Colin into a weird celebration dance I’ve only seen during Saints victories. The sweetest moment: a national guardsman, baby-faced, fully dressed in combat gear, rifle in hand, stands in an ice cream shop and says, “cookies and cream, please.” The chef replied, “on the house.”

You can buy gas, groceries, and stamps. You can visit a number of bars, even past curfew. You can dine out with linen napkins and real silverware. You can meet people who get it– all of it. Every emotion you’ve experienced in these weeks. They know.

For all of you who can come home, those who still have a resting place, know that the city is ready for you.

All my love from home,

The mood of those of us living here continues to be fluid. There’s been an uptick in activity since December began as people seek to situate themselves for the holidays. The pace of moving back, and moving away, has picked up. People stare wistfully at moving vans, wondering if they signal another arrival or another departure.

Christmas decorating has begun in earnest. There’s been a conspicuous rise in suicides. Faith in the city government fluctuates with each morning’s headlines: new plans approved, more bodies found. Faith in the federal government is non-existent and many people feel we’ve been written off as the administration returns its energies to the war and scandal damage control. We worry about misleading reports in the national media saying we’re not worth saving (60 Minutes) or that everything is back to normal (the Rush Limbaugh Show). We grow tired of the news media using the French Quarter as a barometer for the rest of the city. If I need to go anywhere out side my neighborhood, I still have to drive through miles of utter destruction to get there.

And you hear reports everyday of sheetrock being hung, new leases being signed, new appliances moved in. It’s a struggle, but it goes on, and I guess that’s the most important thing.