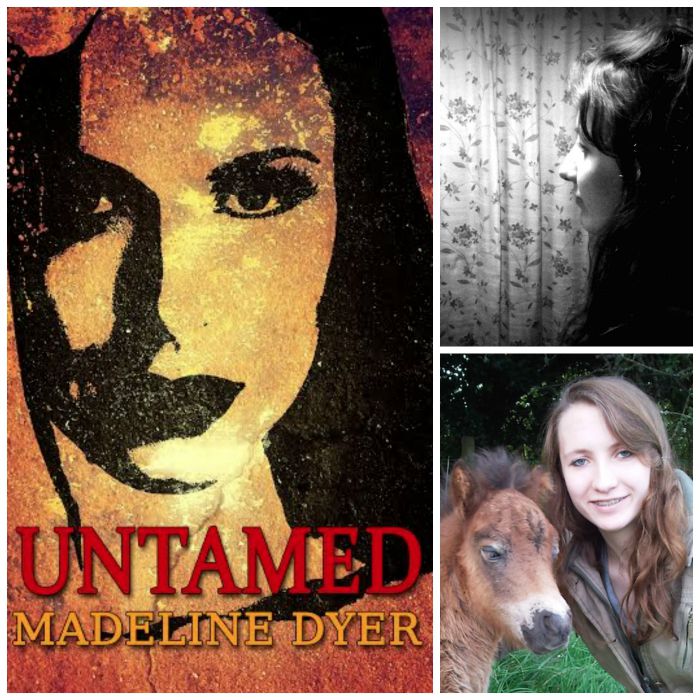 Madeline Dyer is pretty amazing. She signed her first book contract when she was 19. She trains Shetland ponies. She’s a college student. And she does all this while managing a disorder called Ehlers-Danlos syndrome type 3. Madeline also is indirectly responsible for me getting a book contract with Prizm: on a private Facebook group for women writers, she shared news of her book debut. I thought, Hmm, that manuscript sounds similar to mine… Maybe I should submit to Prizm, too. I did, and the rest is history. Madeline’s novel, UNTAMED, came out the month before DESTROYING ANGEL, so we have been navigating the ups and downs of a book launch together—her support has been invaluable.

UNTAMED is spotlighted this week as part of #quietYA, a roundup of 21 under-the-radar YA novels. Keep your eye on that Twitter hashtag today to learn about other underrated YA authors and nab giveaways. In this interview, Madeline talks all about writing.

UNTAMED is your debut novel, but it is not the first book you’ve written. How many full-length manuscripts did you write before penning UNTAMED?

Before writing UNTAMED, I’d completed two other full-length novel manuscripts, as well as a 40,000 word novella. I’m sure that all three of these manuscripts trained me up to write UNTAMED, even though they’re all very different genres to my debut, which is a YA dystopian novel. Writing these manuscripts really helped me find my narrative voice and I had so much fun with them! I’ve recently been rewriting and editing one the second of the full-length manuscripts (a YA mythology-based fantasy), and I hope to get it ready for submission soon.

You’re also a horse trainer and university student. What does a typical day look like for you?

Yes! That makes me sound so busy! I live on a farm where we have Shetland ponies. My stallion, Victor, recently passed his VVE SPSBS stallion inspection and is now a licensed stallion; he was the first foal I ever bought and trained on my own, teaching him how to walk and trot on a lead-rope, be happy having his feet picked up—that sort of thing. My parents showed me how to train foals, as they’ve been breeding Shetlands for nearly 30 years, and they’re always on-hand. I also trained our youngest mare, Bluebell, when she was a foal too. We do breed from our ponies, but we’re now quite a small stud, generally aiming for a foal a year. Our ponies are definitely more like pets to us than breeding stock—and we only breed foals so long as we’re able to look after them, physically and financially, as there’s no guarantee that we’ll be able to find a suitable new owner for a young pony. Plus, I always want to keep the foals! But the majority of the work I do with our ponies isn’t the training. It’s the day-to-day care: feeding, grooming, mucking out stables, health checks. Our ponies really do feel like family.

And, yes, I also attend Exeter University, and have just finished the second year of an English degree. So my days do get quite busy, especially when I try to fit in writing too—but I don’t attend uni everyday, as I’m on a reduced timetable for health reasons.

So, yeah, a typical day tends to start with looking after the ponies (and our other animals), and then heading to uni for a seminar, before returning to do more with our ponies. And then there’s the writing too that I try to fit in—but often don’t manage on the days when I do attend uni. I don’t really have a definite daily routine (other than seeing to the ponies every morning and evening), as I’m often required to be at uni at different times—and I have hospital appointments to schedule in too.

You are a very prodigious writer. How do you feel when you’re writing? Do you look forward to it?

Thank you! I definitely look forward to writing—even on the days when I don’t actually feel like it… it’s the feeling afterwards, once I’ve written for the day, and have added so many thousand words to my current manuscript that I particularly love.

I’m curious about your novel writing process. I read that you wrote UNTAMED in 28 days and edited it in eight weeks. How long did you work each day? Do you give your manuscripts to critique partners for feedback?

Yes, I find it easier to write the first drafts as quickly as possible, usually spending between an hour and five hours on a manuscript each day. I’ve had times where I’ve written 12,000 words in a day! Editing always takes longer, as does rewriting, as that’s the time when I really think about the overall manuscript and its arcs, evaluating it in a more analytical way. First drafts are a lot freer and rather messy!

So, yes, I wrote UNTAMED in just under a month in June 2013, and then spent September 2013 and January 2014 doing substantial edits and rewrites—the months in between June and September were spent drafting the rest of the Untamed Series. I have a group of lovely beta-readers and some awesome critique partners who really helped me develop UNTAMED.

I find it amazing that you signed a contract when you were 19. You got four offers for UNTAMED. What made you choose Prizm Books?

Thank you! As soon as I got the offer from Prizm Books, I was so excited and I was pretty sure that I wanted to go with them. Not only was their contract good, but they were also the company that had been established the longest out of the four who had made me offers. I was also very pleased with the distribution network that Prizm has.

What do you hope to accomplish with your career as a writer? Where do you want to be when you’re 30?

Well, I’d love to be a full-time writer so I can spend as much time in these made-up worlds as possible! I’d love to have several novels (and, hopefully, series!) under my belt by the time I’m 30.

What writers do you most admire, and why?

There are so many! The ladies in my critique group are pretty awesome, and I admire how disciplined they are with their writing. But I also really admire writers such as Richelle Mead and Rick Yancey, because I know each book that they release will be fantastic.

You have mentioned that you have a chronic illness. How does that affect your writing, if at all?

I’m diagnosed with Ehlers-Danlos syndrome type 3 (a genetic connective tissue disorder) and went on to develop Postural Orthostatic Tachycardia Syndrome (a disorder of the autonomic system which) when I was 17. The first one doesn’t really affect my writing a great deal, unless I dislocate something, or if I’ve been sitting awkwardly, as my ribs do have a tendency to slip around a bit! But it’s the second chronic condition that affects my writing more; POTS means I can’t stand stationary for long without fainting, and I’m also affected if I sit really upright. Because of this I find it really difficult to sit at a table, so can’t really work at a desk, as I get the tachycardia response where my heart rate often doubles and my blood pools, limiting the amount of oxygen I get to my brain. Therefore, I do most of my writing on the sofa, where I can curl up or raise my feet to stop the blood pooling, and think more clearly. But POTS also causes excessive fatigue too and visual disturbances, which can make it tricky to write at times, or feel motivated to write.

But, I’m sure that being a writer has really helped me cope with having these two conditions. Even though there are a lot of things I physically can’t do (especially on bad days), I still have my imagination—and it’s my writing that defines me, not my illnesses.

What is your advice for aspiring writers?

To write every day, preferably getting into a regular routine. And write what you want to write, not what you think you should be writing, or what someone else wants to read. Writing’s such a personal thing, so I think you have to be really into what you’re writing—readers can tell if you aren’t.

What has been the most surprising challenge when it comes to launching a book?

Definitely the promotion and marketing side. Before I got a book deal, I really was in the dark about how to promote an upcoming book. But it was kind of fun learning! I’ve written lots of guest posts and blog posts which have really helped get my name out there. Promotion can be challenging, but it’s so rewarding to see the results.

In writing UNTAMED, I wanted to create a protagonist who felt real and had flaws, but could still be considered strong. So many times, I’ve read YA novels where the main characters were always so athletic, excellent at fighting, and so confident and able to stand up for themselves no matter what, but I couldn’t always relate to them. I wanted to write a character who felt more human, someone who had flaws. Yet, I also wanted my main character to be able to be considered strong at times—to show that ‘ordinary’ teenagers can be strong too, even if they have periods of self-doubt, and feel intimidated by certain people. Because of this, I’ve been particularly pleased at the feedback I’ve had from readers about UNTAMED; many have picked up on how real Seven felt, liking how she had obvious flaws, yet still these readers saw an inner-strength to her, and admired her for it. This was really important to me.

Madeline Dyer is the author of Untamed, a YA dystopian fantasy novel from Prizm Books (May 2015). She is currently working on book two in the Untamed Series, as well as a new dystopian trilogy for adults. Keep up with her on Twitter, Facebook or her website.