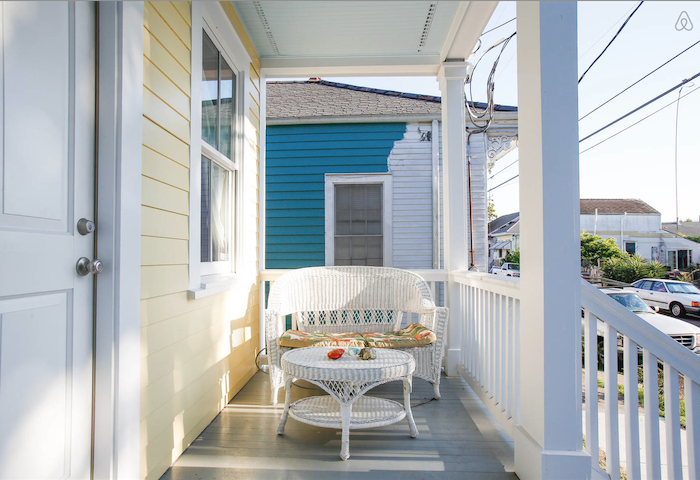 Our front porch…and the cover photo of our airbnb listing.

There’s an invisible stream of money flowing through the city,” my friend said. We were at a party, guzzling sangria. “You just have to find a way to tap into it.”

He was right. My hometown, New Orleans, gets nine million tourists per year. While they’re here, they need places to eat, visit and sleep.

So I decided to put my place on airbnb.

I’d used airbnb before as a traveler on a trip to Toronto because it offered a cheap, personal alternative to a hotel. While the bed was comfy, the hosts hadn’t bent over backwards to accommodate me. There were dirty dishes in the sink, and their living room was trashed. Like, couch cushions removed and flung across the room and everything buried under clutter. I felt empowered by the low standards. My impression was, “I could easily make money doing this.” Several of my friends admitted to paying their rent with airbnb income. So I tidied my house, snapped a few photos and wrote up its key features.

I emphasized a few words: “spacious,” “private” and “your.” I was super honest about the place’s up- and downsides. We set our rates at $69 a night, a competitive price for the neighborhood. But days went by and nobody inquired. Was my house not good enough? Were travelers deterred by my lack of references on the site?

That’s when I saw airbnb offers free professional photography. I submitted a request, and within a day, a purple-haired, fae-like photographer named Kerry had gotten in touch. “I’m looking forward to photographing your Airbnb listing and helping you showcase your space,” she wrote. She came the next day, snapped photos and was done in 15 minutes. The next day, the set went live on airbnb. And bam, the floodgate opened. Within a few days, we had our first request: two young women from New Jersey stopping in New Orleans on a road trip to Austin, Texas. Pretty soon, every weekend was booked.

The guests have so far been incredibly pleasant, giving us everything from artisan chocolate chip cookies to art lessons, in addition to paying our nightly rate. Some like to hang out and join us on trips to neighborhood bars; other times, we hand them the keys and then never hear from them again. So far, the biggest inconvenience is lack of access to space. The house is only 1,000 square feet, and sacrificing the master bedroom and front porch take a bite out of the living area. It’s also a hassle to sleep on the twin bed in the spare room with my boyfriend. But overall, this is an easy way to make money literally in my sleep. Aside from the hour spent cleaning the house, washing sheets and towels and making sure there are empty drawers in the bedroom, it requires no effort.

There are some added expenses: greater utility use, more toilet paper. And then there are the hidden temptations: I’ve spent more than a small chunk of the income on improvements to the house, adding faster Wi-Fi service and upgrading our bedsheets, mattress cover and patio furniture. I’ve got my eye on a $300 set of Turkish towels, but the line must be drawn somewhere.

While short-term rental offer a great side line of income, I would never want to become dependent on it. First, tourism is very seasonal. Second, I worry that there will be legislation passed that puts a damper on the site. And third, I don’t want to always feel like a guest in my own home. I like having the ability to turn down requests because I feel like binge-watching Netflix in my underwear.

But for now, this is an easy way to pay the mortgage while meeting an interesting stream of international and national travelers. 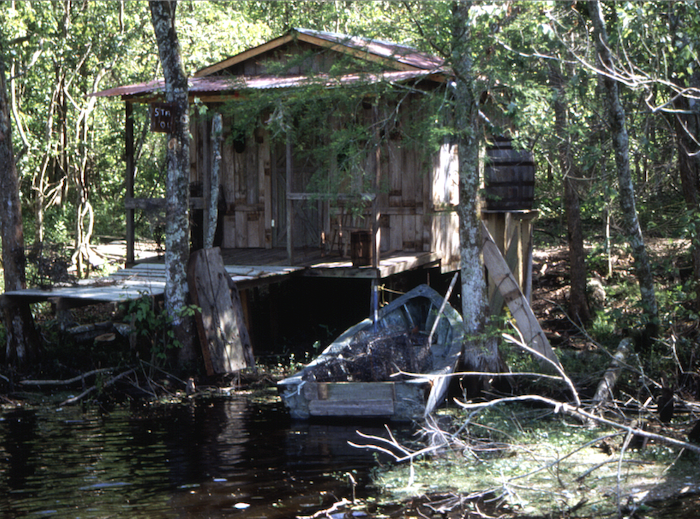 Last weekend I went to a barbecue in a weird little nook just off Franklin Avenue, tucked by railroad tracks and an interstate on-ramp. I’d lived a few blocks away in 2002 and 2003, when I rented a shoebox-sized apartment on Jonquil Street. But I’d never visited this little patch of ground.

The host, a PhD student my boyfriend knows from LSU, called it a farm, but there wasn’t much by way of agriculture. Some chickens sleeping in their coop. A trailer. A warehouse collapsing on itself. The host said some dude had hidden a bunch of heroin in there. The dude wound up going to rehab, but he wanted one final bender before sobering up, so his dad went out to the warehouse to find his heroin. The host said the dad had a lot of compassion. I said he sounded like an enabler. So, we had different ways of thinking about things.

But I got past the rough patch and was having a pretty good time chatting with the host and his girlfriend about their black bean burger recipe. Other people started to arrive, people with names like Rotten Milk and Arrow.

Arrow had long blonde hair braided under a baseball cap. She was from a small town in upstate New York. I told her about my sister, who lives in Rochester. She told me about her aunt, who owns orchards and wineries. Then she asked the host how he was doing.

“So you’re liking your program?” she asked. “You said there’s a lot of international students.”
“Yeah, there are.”
“That makes sense,” Arrow said thoughtfully. “I mean, who else is going to go? Honky Louisiana people?”

It pissed me off. And I didn’t really feel like talking to anyone much after that. Part of me is still angry, part thinks I’m being too emotional, and part feels relieved. Because I know that’s how a lot of transplants see Louisianans: backwards, hopelessly bound by their own prejudices. A Southern accent conveys stupidity. Denham Springs is the heart of darkness. At least this particular Northern white girl was upfront about it. But I suspect she might not have been had she known I was from Baton Rouge.

Louisiana has a lot of problems. There are racists, sexists and homophobes here. It’s also impoverished, diseased and murderous, plus it has the highest incarceration rate in the world. And yeah, the education system is troubled, especially in Baton Rouge, where failing school districts have prompted “a new apartheid.” Also, there was that hurricane not so long ago. So when I go to a party and I hear Louisianans are too dumb to go to grad school? That just feels like being kicked when we’re down.

I would suggest, to anyone moving here, before you accuse Louisianans of being backwards, stupid or prejudiced, ask yourself why? Why do you think that? And what historic, economic and geographic factors might have conspired to make Louisiana’s parishes bloodier, sicker and poorer than the counties you came from? Ask yourself, ask other people, learn about the place you’ve chosen to call your home before you insult its people. Because to do otherwise, well, that’s prejudice, plain and simple.